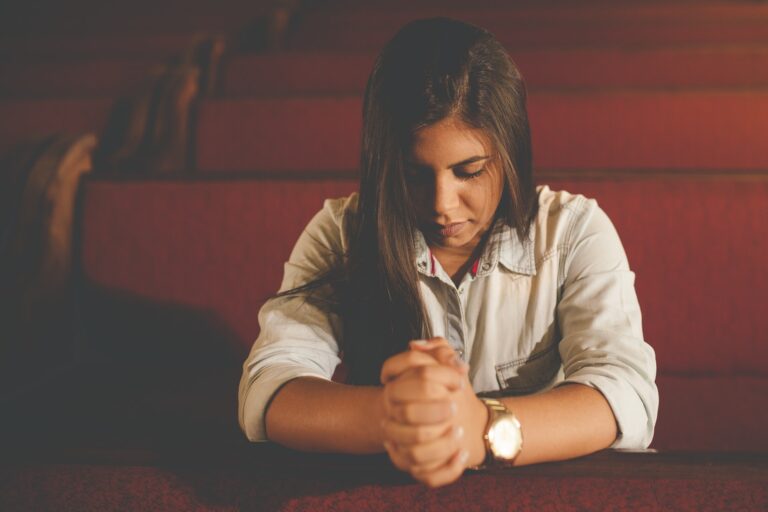 Jesus often sought solitude to pray; sometimes he rose early in the morning to pray other times he prayed well into the night. Jesus knew his heavenly Father always heard his prayers and he thanked God for hearing him. Jesus also thanked God for revealing the gospel first to the common people and not the learned and powerful. When his disciples asked Jesus to teach them to pray, Jesus taught them to address God as Father in what we call the Lord’s Prayer. Jesus said to pray for daily needs, forgiveness for sins as they forgave others, protection against temptation, and that God’s will be done. In his teaching, Jesus said prayers were not for show, but rather sincere expressions of faith to God best spoken in private. He explained that God heard and rewarded those who prayed in this way. He also taught his disciples to pray for their enemies and to bless in prayer those who persecuted them.

In a parable, he taught his followers that they should always pray and not give up. In another parable, Jesus taught that we should be careful not to pray in pride about our righteous acts, instead we are to pray in humility recognizing our own sinfulness and need for God’s mercy. Parents brought their young children to him that he might pray for them which Jesus happily did, saying the kingdom of heaven belonged to such as little children. Jesus warned his disciples about future terrible suffering that would come upon Jerusalem and he told them to pray about that event.

Jesus told Peter that he had prayed that his faith would not fail, because Satan wanted to attack Peter’s faith so as to separate him from Jesus like chaff is separated from wheat. Jesus knew Peter would soon deny that he even knew Jesus, and yet Jesus had plans for Peter to repent and return to him so Peter could care for Jesus’ church. Jesus petitioned God on Peter’s behalf.

While in the garden of Gethsemane shortly before he was arrested, tortured and crucified, Jesus prayed for God to remove the cup of suffering that was before him, but Jesus also prayed that God the Father’s will be done and not his own. So he drank from the cup. During that same terrible night, Jesus told his disciples that instead of sleeping they should be praying for themselves that they would not fall into temptation. As he was dying, Jesus prayed for forgiveness for those who were crucifying him for they acted out of ignorance. As he breathed his last breath on the cross, Jesus prayed and committed his spirit into God’s hands.

In John 17:1-26, we find what is known as Jesus’ High Priestly Prayer, the longest prayer of his recorded in the Bible. Jesus looked forward to glorifying God by completing the work God had given him to do. He also spoke of being reunited with God in heaven and returning to the glory he shared with the Father before the world was created.

Jesus spoke these things; and lifting up His eyes to heaven, He said, “Father, the hour has come; glorify Your Son, that the Son may glorify You, 2 even as You gave Him authority over all flesh, that to all whom You have given Him, He may give eternal life. 3 “This is eternal life, that they may know You, the only true God, and Jesus Christ whom You have sent. 4 “I glorified You on the earth, having accomplished the work which You have given Me to do. 5 “Now, Father, glorify Me together with Yourself, with the glory which I had with You before the world was. NASU

Jesus goes on to pray for his disciples living at that time. He prayed that they would be one and that God would guard them just as Jesus had guarded them. Jesus also prayed for us and all his future disciples, that we would also be one and that the world would know that Jesus was sent by God. Some of the things Jesus prayed were unique to him, but for the most part his reliance on God in prayer and the things he prayed about are a model for us to practice. Let’s follow his example more closely. What should we be praying about?

Locate some of the prayer references mentioned above and share the scripture passages and your insights about Jesus’ prayers in the comments. I used Bible concordance software to prepare this post; you may want to use a concordance also.